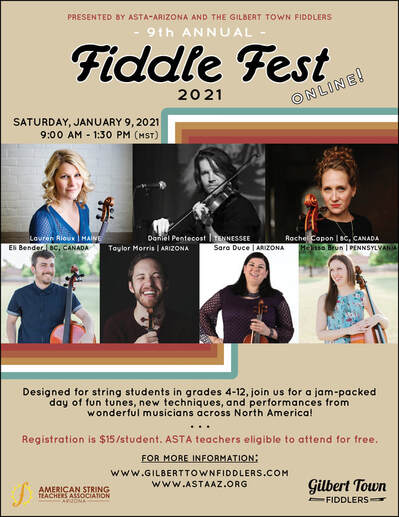 The 9th Annual Fiddle Fest, hosted by the Gilbert Town Fiddlers in conjunction with the American String Teachers Association - Arizona Chapter, is a day for string students and teachers alike to explore fiddling traditions from around the world. It will be a packed day of fun tunes, new techniques, and performances from wonderful musicians. While Fiddle Fest is geared towards students in grades 4-12, all student levels on bowed string instruments (violin, viola, cello, and bass) are welcome!

This year's Fiddle Fest will be held on Zoom with incredible teachers from across North America! Our flexible class structure allows students to "choose their own adventure," picking classes and teachers that suit their individual ability level and interests. And, at the end of the morning, students can sit back and enjoy performances from the teachers while they eat lunch at home! This year's Fiddle Fest faculty include:

During Fiddle Fest Orientation, students will be given examples of difficulty levels they can expect to encounter, along with some tips on learning by ear for those who are new to the process.

Each class will have a separate Zoom link, so students will be able to attend different levels if they want to learn from a certain teacher, explore a certain topic, or decide they need to move at a slower/faster pace.

A complete schedule with separate Zoom links and course descriptions will be sent to all students in the days leading up to Fiddle Fest.

Cellist, educator, and composer, Eli Bender lives in Victoria, Canada. Having completed his studies in Music Education at Michigan State University where his growth as a cellist was overseen by Suren Bagratuni, his work in the realm of creative musicianship led him to study with cello masters such as Mike Block, Natalie Haas, and Rushad Eggleston.

This balance of classical pedagogy and creative musicianship has offered him opportunities to teach and perform with a variety of ensembles including the Marquette Symphony Orchestra, the band Gifts or Creatures, interning with the Fiddlers Restrung of Saline, and acting as Music Director for the Illusion Theater of Minneapolis.
​
Eli enjoys a diverse international career, returning to share his music in the USA as much as possible with his exciting ensemble The Sound Accord. In Victoria, Eli can be heard playing in the studios recording for an array of musicians as well as a member of the Victoria Cello Quartet.

Melissa Brun is a professional cellist and freelance teaching artist, holding a BM and PC from Purchase College Conservatory.  She is currently on faculty at Millersville University, teaches cello at Waldron Mercy Academy, and hosts her own private studio.  She is a founding member of the chamber-folk sextet, The Sound Accord, with whom she has toured and presented at various national conferences, and a new member of Irish trio, Maggie’s Boots, who plays frequently in the Philadelphia area.
​
Melissa is also a clinician for D’Addario Orchestral, teaching workshops to students and teachers in the Philadelphia region about strings - how they’re made, why they sound differently from one another, and how to make informed choices about strings.  Additionally, she recently took on a managerial role with the Chester County Youth Orchestra.

Also an avid pit musician, Melissa has performed at various professional theaters in the Philadelphia region, and has played with several Broadway touring companies (Cinderella, A Gentleman’s Guide to Love and Murder, Matilda) and has soloed with Broadway stars, Kristin Chenoweth and Jonathan Groff.

Melissa frequently directs and choreographs glee clubs and performance-based summer camps, both at the preschool and elementary level.  She is also in the process of co-writing, composing, and acting in an interactive musical designed for children age 4-7, of which Karl the Cello plays a leading character.

Rachel Capon is an innovative and boundary-pushing multi-genre cellist. It is within Rachel’s desire to be a lifelong student of the cello that has set her apart from many others. Her ability to adapt and engage in new musical settings is what has made her one of Canada’s most exciting cellists. Her versatility has made her an active session musician working on projects from hip-hop, Cuban, jazz, folk, country, bluegrass, and classical.

A native of Gabriola Island, BC, Canada, Rachel is based in Victoria, BC. At the University of Victoria, studying with cellists Pamela Highbaugh Aloni & Paula Kifner, she obtained her Bachelor of Music in 2007. Relocating to Toronto, Rachel definitively pushed her musical territory beyond the classical realm. In 2011 with the guidance of Yo-Yo Ma, Rachel traveled to New York City to study with avant-garde cellist Mike Block. Rachel found herself immersed in the world of North American and World fiddle styles discovering new territories for her beloved cello. This trajectory has seen Rachel working with artists such as John Reischman, Gary Gjellgaard, The Alchemical Opera Company, Illusion Theatre, Miranda Mulholland, k-os, and Alex Cuba, and now the Pacific Opera Victoria.

After watching older students perform at a grade school assembly while in 2nd grade, Sara Duce was smitten with the violin and vowed to play it one day. When the opportunity came to choose an instrument, the viola chose her instead.

​Now in her 21st year as orchestra director at Greenfield Junior High in Gilbert, AZ, Sara loves working with young string students and helping them to grow and develop as musicians and as people. While orchestra director is her “full time” passion, she also finds great joy in sharing her love of folk music with many talented high school musicians as a founding co-director of the Gilbert Town Fiddlers. Sara encourages students to play many styles of music and experiment with their approaches to music-making.

​Sara has worked with fiddlers of all ages at various local fiddle camps and workshops. She is committed to sharing fiddle with other educators, including through a workshop sponsored by ASTA-Arizona and a presentation at the National ASTA Convention, the latter with the Gilbert Town Fiddlers. Sara currently plays violin with Sunflower Strings, subs with various local quartets on both violin and viola and works as a freelance fiddler and instructor.

Hailed by a 2nd grade classroom as “wreely nice and kind” and “the coolest man on erth,” Taylor Morris enjoys blurring the lines between violin and fiddle. Eagerly collaborating across musical genres, he has performed in 48 states and 13 countries as an alumnus of the Canadian world-music troupe Barrage, with duo partner Tricia Park, with chamber-folk string sextet The Sound Accord, or as a soloist. Offstage, Taylor obtained a master's in education from Harvard University and teaches nationally as a guest educator and clinician. He co-founded/co-directs the Gilbert Town Fiddlers (an extracurricular high school fiddle group), serves as a guest lecturer at Arizona State University, and runs a summer camp for young musicians in the Phoenix area called StringPlay. For more information on Taylor, please visit: www.taylormorrismusic.com.

Daniel Pentecost is a multi-instrumentalist and vocalist from Nashville, TN. Though his first love and passion belongs to the violin, he also plays mandolin, guitar, bagpipes, banjo, harmonica, and he has an accordion he purchased for $79 off of eBay with which he dabbles.

​ Daniel attended Belmont University in Nashville, TN, where he majored in Commercial Violin with emphases in Performance, and Composition and Arranging. After graduating with honors from Belmont, he auditioned for, and was hired by Barrage, a Canadian-based, multi-genre fiddle show. He toured with Barrage from August 2010 till May 2012.  While with Barrage he played in 8 different countries on 3 continents.  These tours included 2 tours to China, 3 to the Netherlands, and 2 to Italy.  He performed with them for festivals; awards shows; and Beijing TV’s Global Gala broadcast for the 2012 Chinese New Year Celebrations at the Water Cube, home of the 2008 Olympic aquatic events. Now a permanent Nashville resident, Daniel is a part-time hobby farmer, a casual beekeeper, a multi-instrument teacher, and a musician. He regularly performs with his wife in their duo show: The Megan and Daniel Show.

Lauren Rioux is enthusiastically sought out for her teaching expertise and leads classes and workshops across the globe. In her private studio, she teaches a delightfully rowdy group of over thirty violinists, violists, and fiddlers. Her online learning community JamWithLauren.com provides students the world over with access to her innovative curriculum and inimitable teaching style.
PRESENTED IN PARTNERSHIP WITH: